In the middle of January 2011, I arrived to Phnom Penh in Cambodia, coming with boat on the Mekong river from Saigon in Vietnam. I had already from Internet collected information about the female asian elephant Sambo, which were used daily for tourist rides around the temple Wat Phnom, by her owner, Sin Sorn  since 1993. Sin Sorn also claims a romantic story, about him finding her again, after being separated from her during the years of Khmer Rogue.Now I should see her myself.

She was standing still, appearently on command, because she was not chained, under a tree, with a howdah on her back and eating sugar canes, while people came to see her, and bought sugar canes or bananas from the owner, which they fed her with. It was obvious this was not an optimal place for an elephant, since she had no access to the grassy areas, but was standing all day on stones, or giving rides on the asphalt street circling the temple.

She looked pretty well fed, and her skin looked pretty allright, but her frontfeet looked strange, she didnt keep them completely straight under the body, but more in an angle forward, and they looked curved and deformed,

On distance, I could see that her nails was too long, which I guessed was an affect of the shoes she wore.
As you can see on the picture, it also looked like she shes was putting her weight more on her front nails, rather than on the entire sole, which is very unnatural.

I went to the owner, and presented myself, realizing that Sin Song speak a very limited english, but I made him understand, that I would like to go close, and see her feet, which he happily accepted. Even if the shoes provided a certain protection against the hard stones, and the hot asphalt, when she was being ridden on the street, the shoes also hindered the nails from being naturally worn down. And as footcare seldom was a tradition in asian elephant management, it was no surprise that they were overgrown. She also had various scars and marks, which Sin Sorn was made by Khmer Rogue.

I could not see under the hind feet, because she lacked training to lift her feet on command,and her training and commands seemed to be limited to a couple of Huuuhs and Hiiiees, which made her start walk, or stop, but that was all. A further close look on her was interupted by some tourists, who wanted to take a ride around the temple.

On command to start walk to the platform, there was not alot of hook use, but more repeated uuuhhss, and she was very slow in her movement, towards the platform where the tourists climbed up in her saddle. When she then started to walk towards the street, it was obvious that she had problems to walk, and when she left the paved stoned area, and took the step down on the street, she did it so extremely slow, so I started to think she had big problems of walking. And her pace, while walking among cars, tuk-tuks and motor cycles, was slow, and she had now and then to be touched with the wooden hook.

She was either pretty disobedient, or had problems of walking, possibly also pain, from her deformed feet, and the work.

On this picture, you can see how her front feet are deformed vertically, they are screwed inwards.

Its easier to see on a close up picture. The front middle toe is the largest, and is normally facing straight forward. On this picture you can clearly see how both middle front nails are facing inwards, the left foot is extremely screwed. I have seen this on an elephant from the hungarian stat circus, performing in Sweden in the eighties, she was doing anumber with a single foot stand, e.g. would lift three feet in the air, and balance only on one front foot. This foot was also curved/screwed inwards. I only speculate, but guess this is a result of so many hours on too hard flooring, combined with the elephants weight,, and vertical pressure on the skeleton, from above.

I have worked elephants in riding operations myself, in zoo environment on sawdust or sand trails, or in Africa out in the bush, and it was always with healthy elephants. From my professional attitude, its Ok to use elephants in various commercial operations, but their physical and mental well being, should not be compromized.

I took a tuk-tuk to my guest house, and felt pretty concearned. This was a very unsatisfying situation.

Greeting Sambos mahout good bye, I felt I needed to do something about this, not just go and see her, notice her bad health, and then just leave, and tell people about the poor elephant in Phnom Penh. Her owner appeared friendly and polite, maybe i could convince him to start with foot care? 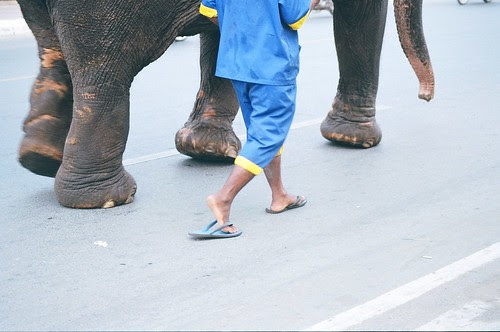 But was footcare enough? When I googled, I found pictures which gave evidence for her foot problems years ago, this picture is from Asian Correspondent and you can clearly see how shes walking on her toes, and not on her soles. (The picture is from 2008) 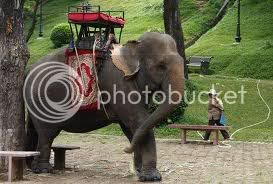 I November 2010, Sambo was banned from Wat Phnom by town officials, who saw her as atraffic problem: I understand that the owner wants to show to the tourist our friend—to see the elephant and give something to the elephant—but the traffic jam is not good. The big problem is here, adding that he would send Sambo to the Phnom Tamao zoo if her owner refuse to comply, Phnom Penh municipal governor Kep Chuktema said. (Source: Sambo Can Work if Owner Promises No Rush Hour Jam) On the picture can be seen how Sambo is supporting her body against a tree trunk, and that shes standing abnormal with her frontfeet.


In January 2011, Heng Chivoan took this picture, added with the text: The feet of Sambo, the beloved elephant who works at Wat Phnom, shod with improvised rubber soles. Because of the jerry-rigged footwear, wounds appear to have opened up between the pachyderm’s toes.
(Source: A mile in her moccasins)