There is between 400 and 600 wild elephants in Cambodia, and the country has also suffered a lot of deforestation, rubber plantations and mining being one of the growing industries that reduces the forest at fast speed, and removing natural environment for fauna and flora. The Royal Government of Cambodia is working on the assumption that 56% of the land is forested. However, current forest cover is closer to 30-35% of total land area - with total allocations to logging companies, if approved, of 35.6%. The RGC is therefore in danger of selling Cambodia’s entire forest area to foreign companies. (FAO: elephants in Cambodia.) 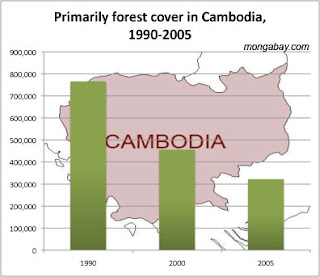 About half of Cambodias wild elephants live in Cardamom Mountains of Southwest Cambodia, the rest in small, scattered populations in Mondulkiri and Ratanakiri Provinces in eastern Cambodia. (Duckworth and Hedges, 1998) Read more: Asian elephant globally at IUCN red list.

Cambodias wild and captive elephants are are coordinated by The Forestry Administration, supported by international organisations like The Wildlife Conservation Society (WCS), WWF Cambodia and Fauna and Flora International (FFI). 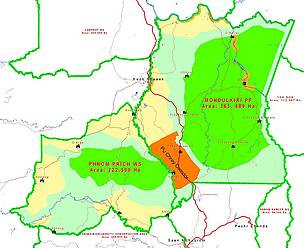 There are some seasonal migrations of wild elephants which are not always considered.

Presently, a wildlife corridor in Mondulkiri is under threat to be transfered to rubber plantage, which will cause elephant-human conflicts,and probably reduce the elephant population. 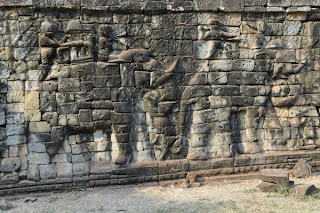 The famous parade of elephants complete with their Khmer mahouts. were documented at Terrace of the Elephants at Angkor Thom,  in the Ankhorian period, showing elephants used in wars during the Khmer empire under king Jayavarman VII.
. Elephants were also kept on the royal grounds during french colonisation.

During the Pol Pot regime, some domesticated elephants reverted to a wild state.

Very few wild elephants were captured during the period 1980 to 2000, according to local people in Mondulkiri.

Most of Cambodias captive elephants  are privately owned by tribal peoples in eastern Cambodia.

Only the Jarai, Ede, Krung and Pnong still actively work with elephants. The Pnong people are belonging to the local indigenous Bunong (Phnong in Khmer, mening “people of the hills,” Osborne (1985) says, “Uplanders were moi to the Vietnamese, phnong to the Cambodians, and kha to the Laotians.) (FAO: elephants in Cambodia.)

Angkor Wat elephants (Compagnie des Eléphants d’Angkor) has between 15 and 30 elephants which are used for tourist rides around the Angkor temple complex.

Close to Sen Moronom In Mondulkiri, is two elephant trekking camps, Putang elephant camp and Phulung, where some 15 elephants are kept for tourist rides, as well as one kept for rides at Sen Moronom water fall.

Elephant Valley Project is a sanctuary outside Sen Moronom which keeps 9 elephants, bought or rented, in very natural sourrandings, where they are herded in the forest, and by this concept, also contrubuting to protection of their environment.

Outside Phnom Penh, Phnom Tamao Zoo and Wildlife Rescue Center house 5 elephants in Zoo conditions. Those elephants are daily taken for walks to a nearby lake, and they also have veterinary recources.

In Phnom Penh, Mr Sin Sorn keep the handicapped and abused elephant Sambo at Wat Phnom, and he rents out elephants to other organisations, like Elephant Valley Project.

One zoo in the south, owned by a government official, Kampot Teuk Chhou zoo keeps a pair of elephants in hands-off conditions.
Posted by DanKoehl at 4:07 PM