Although I had paid for a good seat in the shadow area, I prefered to stay among the mahout houses, and watch the show from there, together with

Apple from Surin elephant Kingdom in Ban Ta Klang, where I stayed a week this spring, listing their 127 elephants, as well as the 56 elephants administrated by the Surin elephant study center at the same place. Both organizations provide economy for the elephants owners, so they dont have to go streetbegging in towns, like the did before. From the mahout house, one has a good overview of the elephants, and the show, and its pleasant with the wind. From here you can also most of the elephants, which will take part in the battle later.

King Naresuan´s elephant is now standing out on the stadium field, prepared to battle. I think that black and gold caparison looks great on this elephant. The black color also has a reason; Naresuan (then known as Prince Naret) was also known as the Black Prince (Thai: พระองค์ดำ). His younger brother Ekathotsarot was known as the White Prince, and his elder sister Suphankanlaya was known as the Golden Princess. In 1563, both princes were sent to Pegu by their father Maha Thammarachathirat as captives to ensure the king's fidelity to the Burmese. Naresuan used the time to study war and war strategy. 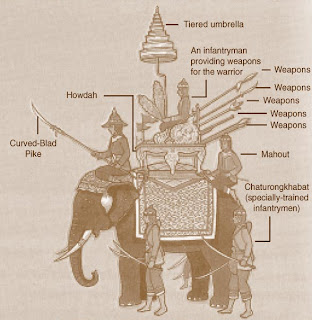 I was also happy to meet Sangduen "Lek" Chailert, owner of Elephant Nature Park in Chiang Mai. I have had correspondence with Lek for some years, but visited to her park only some months ago, upon her kind invitation. Lek and I have a slightly different approach to elephant management, but still I respect her work a lot, and Im impressed of what she has achieved, in taking care of elephants. Now and then politics in animal management becomes the nuclear issue in discussions, and people tend to focus on diffrences, rather than which opinions they have in common, in various discussions, almost forgetting the elephants, during their debate. Lek does not posses such extreme attitude, and I know we share a common passion for elephants, in such an extent, that elephants have become an important, maybe a major, part of our lifes

She told me about an elephants babys death yesterday, which was killed by its mother, and showed me the spot, still giving evidence of a tragical accident. Throughout the modern history of captive elephant breeding, it has now and then occured that a female elephant, mostly giving birth for the first time in her life, has attacked her baby, sometimes killing their babies. In my database, I have listed many such cases. Its not as rare among captive mammals as one would think, and the numbers of this in the wild is unknown. And though those news was very sad, indeed a tragic for the baby elephants owners, such things occur very seldom, although hundreds of elephants concentrate on the Surin stadium during the festival. Dozens of young elephants and babies were brought to the elephant this year, without any accidents, except for this single one. The mother was transported to the owners village, and hopefully, her next birth will be more succesful.

Hardly any country in Asia are so succesful in elephant captive breeding, as Burma and Thailand. On the pictures, a small baby is peacefully sleeping beside her mother, while houndreds of elephants stand around, and people pass by her every second. If used to people, activities, and public, elephants cope well with gatherings like this. Stress only occures for poorly, or untrained elephants.

Lek also showed me her favourite photo spot, a platform for the public to mount elephants for riding, and from there we followed the show, competing in taking pictures. When I was proud to have taken hundreds of pictures, (in reality x) Lek claimed she took over thousand, and I believe her, her camera clicked like a machine gun...
After spending her life with elephants, she still seem to be highly passionate for elephants, and their coexistence with humans.

From our spot we watched the football elephants and other elephant showing tricks, while the most enjoyable is the final part of the show, the war elephants.

So what was the war about?
In 1592, Ayutthaya was attacked by the Burmese again. Minchit Sra, along with the Lord of Pyay, Natshinnaung the son of the Lord of Toungoo, and the Burmese King of Lanna, led the Burmese into Siam.
King Naresuan was now fighting for the liberty from Burmese rulers.

The history legends say that King Naresuan of Ayutthaya confronted his enemy Minchit Sra with a single combat on elephant: Naresuan then urged Minchit Sra to fight with him: "My brother, why do you hide yourself in the canopy shadows? Let us fight the elephant battle for our own honors. No future kings will do what we are going to do."

This single battle between the two warlords is known as Yuddhahatthi, the elephant battle.
After narrowly missing Naresuan and cutting his hat (on display in Bangkok) Minchit Sra was slashed to death on the back of his elephant. This was on Monday, the 2nd waning day of the 2nd month of the Buddhist calendar Chulasakarat Era year 954. Calculated to correspond to Monday, 18 January, AD 1593 of the Gregorian calendar, this date is now observed as Royal Thai Armed Forces day.

In spite of strong firework crackers, not a single elephant pannicked, or went nervous, which is a good indication of quality training, where the elephants have been used to various things, slowly, step by step. Maybe they are not as well trained, as war elephants were before, but not far behind. The logistics also include good food, a pool to drink and bathe, and infrastructure for the elephants owners.

This show is supposed to be the largest gathering of elephants throughout the world, and is kept annually on the third saturday in November. Its highly enjoyed by the excited visitors, and people come from all over the world to Surin during this weekend. But its not only an elephant show, the visitiros also get a brief insight in the culture bewteen man and elephants, which, in spite of so many welfare organisations, still survives and prosper in Asia.

The show ended with a gathering of all elephants, this years reaching a number of 280 elephants of varoius ages.

Only a few hours later, dozens of trucks left Surin with elephants, while most of the elephants living in Ban Ta Klang, some 62 km north of Surin town, will start the march home tomorrow, after some rest. Ban Ta Klang will also be my next stop on this elephant journey.

Ban Ta Klang is situated some 62 km north of Surin town, and is accessable by bus, which takes one hour. This ancient Kui (or Sui) village has raised elephants for hundreds of years. In the old days, Pachi, the head of the Mahouts, led a number of fellow mahouts to catch wild elephants in border of Thailand and Cambodia. In Ban Ta Klang you see hundreds of elephants in one single day.
Posted by DanKoehl at 3:20 PM