A natural size glassfiber african elephant I bought
from a former sex-club called "Hönan Agda" in Strömstad a month ago, is Swedens largest elephant, and has been rented by XL-Zoo, a newly established Aquarium and Zoological department store in Barkarby outside Stockholm. It will by all means make their store house look better, and attract more visitors until my return from Asia in April, when I surely have some new career plans for this single specimen in the Kingdom of Sweden...


I have also been busy updating the elephant database on David Sheldrick Wildlife Trust and elephant orphanage in Nairobi, royal elephants in Thailand as well as elephants from Circus Chipperfield in United Kingdom. The last days I became very inspired by animal trainer Ryan Easley and the interesting grup discussions on his Blog ShowMeElephants. So much so I started this blog today... 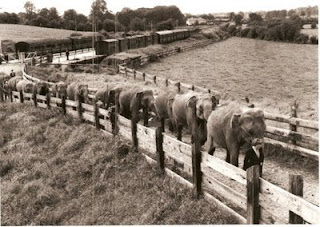 What started with a 100 year old picture by photographer Justin Nelson of 12 Chipperfield elephants in Clonmel railway station, Tipperary, during tour in Ireland in 1952, has developed into an ambitious effort to research all their elephants from 1947.

From 1963 to 1964, eight of Chipperfields older elephants toured europe, on Ringlings europe tour. Ringling in U.S.A. was the worlds largest circus, also known as the greatest show on earth, 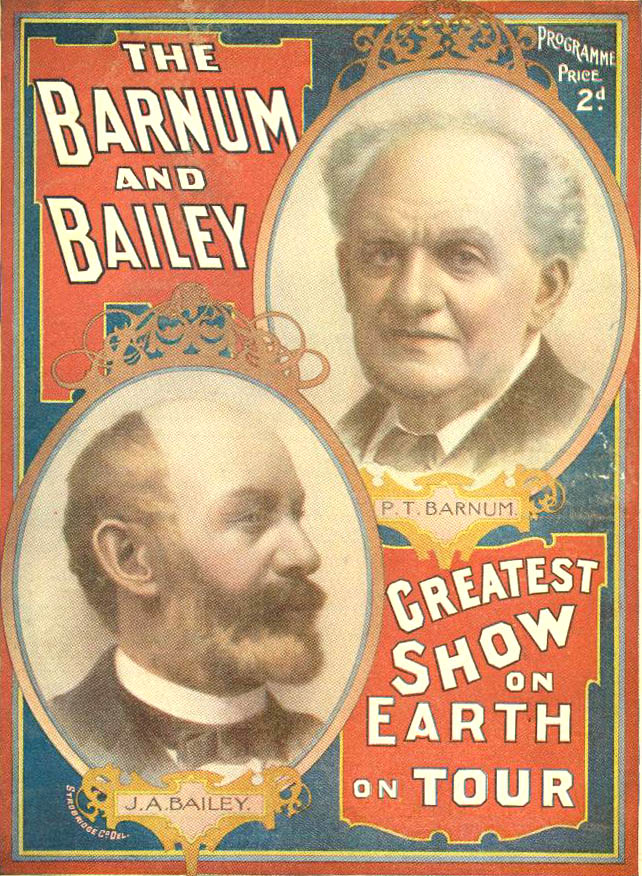 In 1849 the showmen P. T. Barnum and Seth B. Howes founded Barnums Asiatic Caravan, Museum and Menagerie, and imported 9 elephants from Sri Lanka next year.

Later Barnums show travelled under different names and coowners, but in 1888 he and James Bailey finally merged their shows as "Barnum & Bailey Greatest Show On Earth", later "Barnum & Bailey Circus", which toured around the world.

The shows primary attraction was Jumbo, an African elephant he purchased in 1882 from the London Zoo.

When Barnums came to Londons Olympia in 1889 they travelled with 450 performers, 300 horses, 21 elephants, 32 cages and 35 parade and baggage wagons.

Three years later Barnum died, and Bailey purchased the circus from Barnums widow. His closest competiton was the Ringling brothers circus, founded 1884. Six years later Bailey took his circus to Europe on a tour across the continent that lasted through 1902.

Ringlings expanded during the years when Bailey toured europe, and after Bailey died in 1906, bought his circus for a price of US$ 400,000. The first years they toured both circuses, until the Ringlings finally merged them 1919 in Bridgeport, Connecticut, as Ringling Brothers Barnum & Baileys Circus , nicknamed RBBB, owners of 38 elephants. Ten years later Ringling Brothers purchased American Circus Corporation which consisted of Sells-Floto Circus, Al G. Barnes, Sparks Circus, Hagenbeck-Wallace Circus, and John Robinson Circuses, and were owners of 90 elephants, among them 10 asian bulls, a world record. In 1937 John Norton Ringling took over the circus and modernized it. In 1963 he copied Barnum and Baileys idea and brought his circus to Europe on Ringling Brothers Barnum & Baileys europe tour, where he also leased more animals and artists to fill out the three rings. Apart from the eight elephants from Chipperfields he leased an act called "Banda 5", from Fossets Circus, trained by Ivor Rosaire. After the Ringling europe tour, the 8 Chipperfield elephants were leased to Circus Caravan, owned by the Swedish circus man Trolle Rhodin. 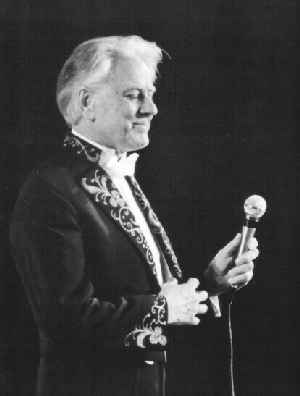 In July 1943 phosporus bombs fell on Hamburg, and Hagenbecks Tierpark was more or less destroyed in 90 minutes. 400 animals lost their lifes. Hagenbecks Circus in Hamburg decided to send their elephants to Malmö, where they could be housed in the winter quarters of family Rhodin.

The elephants came 1944 with their trainer Hugo Schmitt, and toured Sweden with Zoo Circus. Hugo Schmitt was trained by Hagenbecks famous chief elephant trainer William Philadelphia. On that tour was also Trolles stable master Theodor Kruse, father to Gösta Kruse, who  learned elephant training from Hugo Schmitt, and later becamed a famous elephant trainer in Europe, first touring with Trolles elephants, Safari and Birka, until 1951 when he took over the elephants at Bertram Mills Circus, and later Circus Pinder in Paris, Safari and Birka was sold by Trolle to Zoo Dresden in 1956.


But the elephants were not safe in Sweden!
Taken from the March 8, 1947 Billboard
UNHAPPY ELEPHANT TRAINER RELEASES FIVE BULLS on STREET
Stockholm, Sweden, March 1
Upset by the decision of the Swedish govenment to sell the animals of the former German-owned Carl Hagenbeck Circus, a German elephant trainer turned loose the show's five bulls in Malmoe Feb. 23. The elephants charged down main street smashing windows, breaking lamposts and terrorizing citizens. Police, after vain attempts to halt the animals, appealed to the trainer, Capt. Hugo Schmidt, to round them up. Weeping bitterly, Schmidt finally consented and regained control of his charges. With tears streaming down his face, Schmitt said: The State is making a great mistake in selling them. They have been trained together and love each other. If they are parted they will die.
Mr Hagenbeck contacted Ringling Brothers and Barnum & Bailey Circus in U.S.A. and offered the elephants. Mr Ringling came personally to Sweden and purchased the elephants, on condition that Hugo Schmitt came with them as trainer, and managed to arrange a Visa for him, so he could go with the elephants to USA. 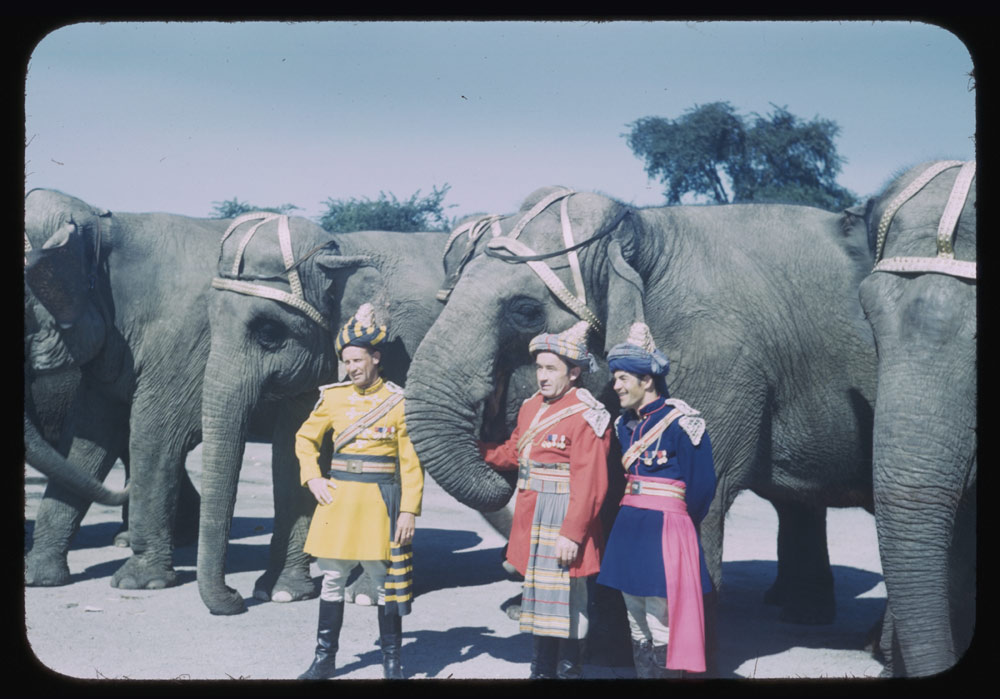 
Hugo Schmitt went with the elephants to U.S.A. and the five elephants Icky, Karnaudi, Minjak (captive-born), Mutu and Sabu arrived at Ringlings in 20 June 1947. Now Hugo Schmitt was responsible for Ringlings previous 38 elephants, plus the 5 ones he brought from Sweden. Together with Hugo and the elephants, came also Axel Gautier as Schmitts assistant.

Trolle Rhodin had married Ingeborg Gauthier, sister to Alex. Trolle now had valuable contacts within RBBB. It was maybe Trolles relation with RBBB that gave him the opportunity to lease the Chipperfield elephants after their RBBB europe tour. During this time, he also decided to join Ringling as their general manager and he brought large parts of his circus Caravan with him to the United States. In November five of the Chipperfield elephants were taken to Bremerhafen, in order to be transported to the US, bought and imported by Ringling in U.S.A. which now had a new owner;

John Ringling North had sold the circus to Irwin Field for $8 millions.

But the new manager Trolle Rhodin and the five Chipperfield elephants were not the only circus passengers on this Atlantic journey from Europe to The Greatest Show on Earth.. A whole german circus was imported.
Carola Williams on the German circus Circus Williams had a beloved and talented adoptive son, who trained most of Circus´s animals, from horses, carnivores to elephants. Gunther Gebel-Williams was the rising star on the europan circus sky. Harry Williams (1902-1951) and Carola Althoff (1903-1987), daughter to Dominik Althoff married 1941. Together they had the children Jeanette and Alfons Williams. (Carola Althoff was married before to Reinhold Kwasnik, artist name: Harry Barlay, and together they founded (Circus Barley. In her first marriage Carola had the son Holdy Barley.) 1946: The circus Williams was founded by Carola and Harry Williams, with help from Dominik Althoff. But Harry Williams british citizenship was also a help for the pair to fund a circus right after the ending of WWII. 1946: Circus Williams hired fifteen-year-old Gerd Siemoneit to work as an animal keeper, he became later one of europes most famous animal trainers, and owner of Circus Barum. Heinz Geier, who would later become the Director and owner of Circus Busch-Roland, started as an animal keeper with Circus Williams. 1947: Carola also adopted Gunther Gebel, abandoned by his mother when he was 12 years old. Gunter was born 12. September 1934 in Schweidnitz, Silesia, as son to scenic carpenter Max Gebel and theater seamstress Elfried Gebel. Max Gebel joined the Wehrmacht and after the world did not stay with Elfried anymore. During two weeks in 1947, Elfried worked as seamstress at Circus Williams, but she left Gunther in the care of the Williamses as an apprentice with a five-year contract. Gunther learned abouth horses from Harry Williams, and about large carnivor training from Charly Baumann and Gerd Siemoneit. 1950-12-22: During christmas engagement for Tom Arnold at the Harringay Arena in London, Harry Williams had an accident, he was violently ejected from his chariot. 1951-01-10: Harry Williams died of his injuries. 1951: Carola Williams leased her circus to Harry Barley, and sent Gunther to her brother, Franz Althoff, from whom Gunther learned how to train elephants. 1952: Carola took charge of her circus again, together with her brother Adolf Althoff, and she gave more resonsibilities to her adopted son Gunther Gebel-Williams, while her own children was not traveling with the circus due to their education. Gunther improved his elephant training from Adolf Althoff. 1956: Adolf Althoff left the circus, and 22 years old Gunther now took over the elephants from him. He also developed further with horses, being schooled by Carola’s father, Dominik Althoff (1883-1974). 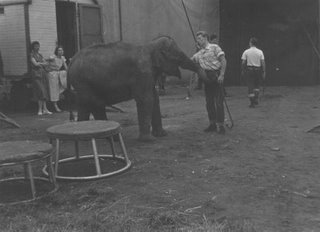 1956: Gunther Gebel-Williams at Circus Williams 1956 in Erlangen in Germany 1960: Alfons died in a car accident in Belgium. 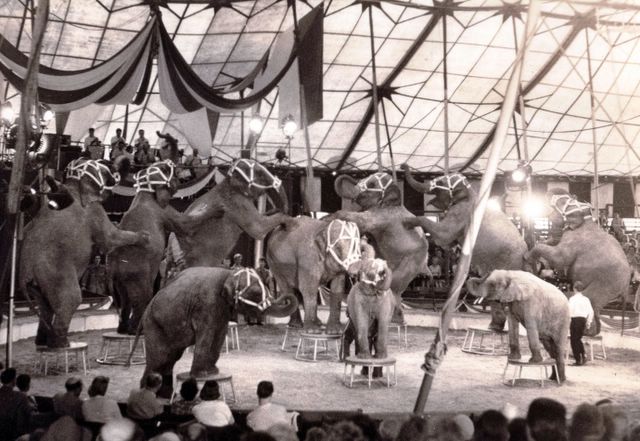 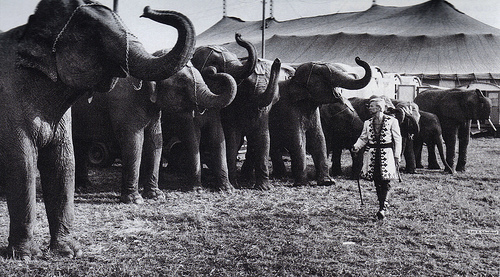 Circus Willams elephants and Gunther Gebel-Williams 1961: The circus had 11 elephants, showed in the ring by Gunther. 1962: Gunther trained an act with the african elephant Kongo and his trusted tiger Bengali. 1967: Jeanette Williams and Gunther Gebel-Williams divorced, and Gunther married Sigrid Neubauer (born 8 September 1943), a former model from Berlin, who had the daughter Tina (born 16 November 1962 in Berlin) from an earlier marriage. 1968: Carola Williams rented out the circus to Ringling Brothers Barnum and Baileys in USA, and the entire circus went over the Atlantic ocean with the Swedish containership "Atlantic Saga", with 17 elephants, 9 tigers and 25 horses. This became the Ringling Red Unit, and Circus Williams did not exist anymore.
1976: Adolf Althoffs son and Carola’s nephew, Franz Althoff Jr, founded Circus Williams-Althoff, but this circus was later renamed to Moscow circus. 1987-11-11: Carola Williams died in Cologne, 84 years old. 1991: Jeanette Williams founded the German National Circus Williams-Althoff, Ltd, touring short time in USA and later giving punctual circus shows. 2007: Jeanette Williams daughter, Caroline Williams, gave birth to the son Dominik Williams. RBBB writes on their website:

Born in the small town of Schweidnitz, now a part of Poland, he and the Circus found each other after World War II in Cologne, Germany. Barnum & Bailey Circus owner Irvin Feld purchased the entire Circus Williams just to acquire the extraordinary talents and performing arts of Gunther. He made his American debut on January 6, 1969, in the world premiere of the 99th Edition of The Greatest Show On Earth® at the circus' Winter Quarters in Venice, Florida.. From the moment Gunther Gebel-Williams stepped into the Center Ring of Ringling Bros. and Barnum & Bailey® Circus, he was destined to change the face of the American circus forever. His totally unique style and uncanny rapport with his animal co-stars created a new standard for circus performers around the world. One of the few performers in any entertainment industry to become a legend in his own time, Gunther Gebel-Williams - the undisputed Lord of the Rings - was universally recognized as The Greatest Animal Trainer of All Time!

No doubt the swedish ship Atlantic Saga left Bremen with a precious and important load and passanger list for RBBB. Trolle Rhodin and his Circus Caravan from Sweden, including Chipperfields 5 elephants, future world star Gunther Gebel-Williams and the entire Circus Williams, including their 12 elephants, adding the Ringling herd with 17 elephants, and establishing the Ringling Red unit. One of those elephants, the 55 year old Baby, were still living on the Ringling Red Unit in 2016, 47 years later, 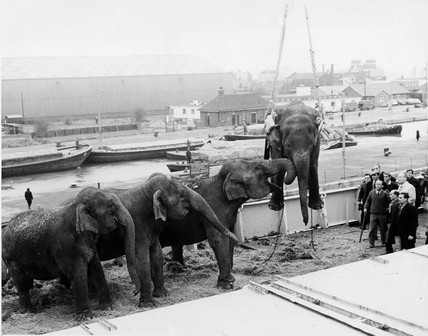 Chipperfield Circus also imported new elephants from Asia in 1963 and together with four they did not sell away before, they embark a ship in England 1965 and make a tour throughout Southern Africa.

They returned to Europe and South West India Docks in 1968, same year as the swedish ship Atlantic Saga left Bremen to sail to America and RBBB.

Four elephants returning from a Chipperfields Circus tour of South Africa. Left to Right: Sally, Lelia, Mary and Camella in the sling. The man with stick is John L Chipperfield..

Inspired by this story about about travels, I packed my trunk and left with Thaiair to Bangkok, for a five months journey in Asia, which kind of never really ended.

For discussion about the Chipperfield elephants 1947-2000, take a look at ShowMeElephants.
Posted by DanKoehl at 4:59 AM