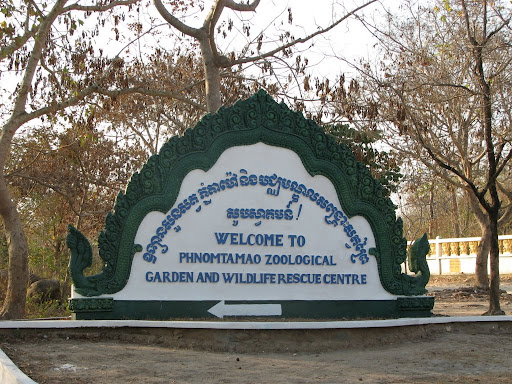 Before leaving Cambodia, I was called by the Phnom Penh Post, and asked questions about the elephant Sambo at Wat Phnom in Phnom Penh. The article is written in Khmer, (សម្បូណ៌​ត្រៀម​ទទួល​ការ​ព្យាបាល) so I havnt been able to read it, the english is said to apprear on friday. In my answers I focused on the owners limited knowledge and recources, and that Sambo must be relocated to Phnom Tamao ASAP.


In February 2011 I visited Phnom Tamao Zoo (founded in 1995), situated less than an hour away from the capital of Phnom Penh, and learned that this is by far, more than zoo, the Phnom Tamao Wildlife Rescue Center is also home to over 1,200 animals rescued from the illegal wildlife trade. Since 2001, Wildlife Alliance has rescued more than 43,000 animals from poachers and illegal wildlife traders, and has dramatically driven down the buying and selling of wildlife in Cambodia and throughout Southeast Asia.

Around 1999, six calf elephants were captured, ranging in age from 6 months to five years old, according to Mondulkiri provincial DFW sources. One particular young elephant that avoided the hunters was brought to the WPO Wildlife Rescue Center in Phnom Penh. During a hunt, the mother of this individual was killed, and the young animal ran into a village. It was caught in a villager's kitchen searching for food. The villagers negotiated with the DFW as they did not wish to raise the elephant. In the end, an undisclosed sum of money was paid to bring the young animal to the Wildlife Rescue Center.

This young animal unfortunately died on 5 April 2001 because of an infection following an accident that resulted in a number of broken bones.

Source:  The status, distribution and management of the domesticated Asian elephant in Cambodia by Chheang Dany, Hunter Weiler, Kuy Tong and Sam Han In 2002, Phnom Tamao Zoo had the first confirmed fatal case of EEHV (Elephant endotheliotropic herpes virus) in Asia: The deceased elephant (“Seima”) was approximately three years old, wild-born [in Cambodia]. She was confiscated from traders in 2002 as an approximately 6 months old calf and placed in Phnomn Tamao Wildlife Rescue Center where she was bottle-reared by keepers and housed with 4 other elephants…. She died in lateral recumbency on May 6, 2004 without observed symptoms and without any treatment. Reid, et al., Veterinary Quarterly 2006; 28(2), p. 63, under Case report/Disease History

In 2007, 138 captive wild animals was recued from neglect and deplorable conditions at the Angkor Zoo in Siem Reap, Cambodia. The government cracked down and closed the Angkor Zoo, and some of the animals were brought to Phnom Tamao. During my visit the elephants were taken for walk outside the enclosure, and getting a bath in the nearby lake.

In March 2007, there were reports of a lone, orphaned baby elephant wandering through the forest in Mondulkiri, with his front left foot severely injured and infected, as a result of hunter snares.

Chhouk was transported 26 hours on the back of a truck to Phnom Tamao, where his treatment began, Nearly 5 inches of infected tissue and bone had to be removed, and he was fitted with his first prosthetic foot in 2009. He is now waering his fourth artificial foot. 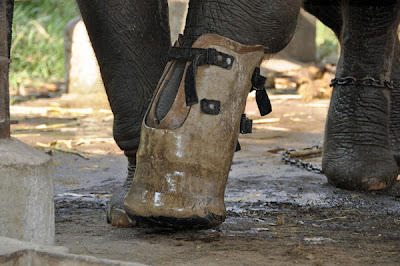 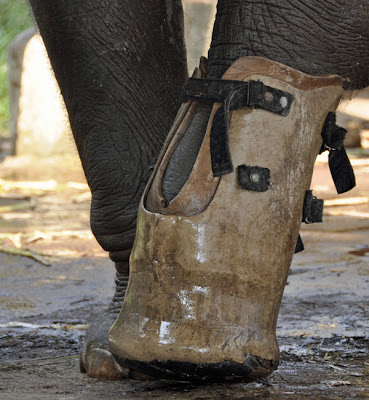 Chhouk's Prosthesis, which was made by the Cambodian School of Prosthesis and Orhtotics (CSPO), with funding assistance from SeaWorld & Busch Gardens Conservation Fund, for a cost of US$30,000