Sri Lanka is an island with a land area of approximately 65,610 km2 situated in the Indian Ocean, 35 km from the southern end of the Indian Peninsula. There are 501 protected areas in Sri Lanka. Protected areas in Sri Lanka accounts for 26.5 percent of total area.This is a higher percentage of protected areas than in all of Asia and much of the World. According to Wikipedia, between 1990 and 2000, Sri Lanka lost an average of 26,800 ha of forests per year.This amounted to an average annual deforestation rate of 1.14 percent . Between 2000 and 2005 this accelerated to 1.43% per annum.

The first-ever nationwide elephant census in August 2011 produced a total of 5,879 jumbos across the island, of those, only 122 elephants were tuskers. (Source) Some environmentalists were unhappy with the methodology and questioned its results. But even imperfect data can inspire more systematic conservation measures.  70 per cent of Sri Lanka's wild elephants are not in protected areas.


Human-elephant conflict has transcended from just being a wildlife management problem to one of the worst environmental and rural social economic crises in Sri Lanka's Dry Zone (Source) In Sri Lanka nearly 120 wild elephants are killed by humans and in return about 65 people die after being attacked by elephants every year. It seems most of those elephants are males, possibly who goes into farmed areas in search for rich food, before, or during their musth period.

A europan organisation that has been involved with elephants in Sri Lanka, is Austrian Sri Lankan elephant research and conversation project (ASERC) which was founded by the vice director at the Vienna Zoo in Austria, Dr. Harald Schwammer in 2005. ASERC gives financial aid to the elephant care centres in Sri Lanka and supports with experts in the veterinarian and management sector. In addition ASERC provides a better education for local people and children in schools, but above all to make better contact with local farmers. In 2007: Sri Lanka Wild Life Conservation Department sources revealed that over the last 15 years, 1,850 elephants, 1,192 of them, male, had been reported killed.(Source)  A number of tragical train accidents also results in elephants dying, but the total annual number is not high.


Meantime, according to Department of Wildlife Conservation (DWC), a number of juvenile elephants been illegally captured in Asirigama for domestication: 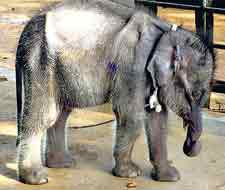 "DWC has in its custody at its Anuradhapura Office a baby elephant which had allegedly been illegally captured for domestication by still unidentified people who on hearing that the DWC was on their trail abandoned it close to Asirigama in the Palugaswewa area. When DWC officials set up a cordon, on hearing of the attempt to smuggle the baby elephant from the Asirigama area, the culprits had tied the baby to a tree in the scrub jungle leaving a few water melons by its side, before making good their escape, it is understood.
They may have been planning to come back when the heat was off, a DWC source said, adding that the baby is a female of about one and a half years. It may have been illegally captured by either killing the mother or when it fell into a waterhole in the jungle.
Many conservationists were of the view that the Asirigama area is notorious for alleged attempts to illegally capture baby elephants. The modus operandi seems to be to capture babies and then introduce them as having been born to captive cow-elephants, they said". (Source)

On July 24 and 25 2004, Sri Lankan newspapers reported the spotting of a white (albino) elephant in Yala National Park, Sri Lanka, a female named Sue, short for Sudu-Aliya" which means "white elephant". Although this was the first time that this had received wide publicity, Dr. Prithiviraj Fernando had observed this animal as a newborn in Heenwewa in 1993. In 1996 the same animal had been photographed in water by a group of enthusiasts. Sudi is mostly a light tan color with white body hair but has a black tail tuft. Therefore, she is not a complete albino.  Source: The White Elephant

In 2008 the captive elephant population consisted of 137 elephants, of which only 27 were tuskers.

The annual Perahera in Kandy, which dates back nearly 220 years, is celebrated July-August each year, where many of the captive elephants can be seen. Another important Perahera is the annual Nawam Maha Perahera at Gangaramaya Temple in Colombo which is held in Februari.


In 1999, Wimalaratne and O, Kodikara DS. from Department of Rabies Diagnosis and Research, Medical Research Institute, Sri Lanka wrote about the first reported case of elephant rabies in Sri Lanka. (Source) which was followed by 2 cases in 2009. In the elephant database, there is presently 5 elephants listed, that died of rabies. Read also about Results of vaccination of Asian elephants (Elephas maximus) with monovalent inactivated rabies vaccine.

The Elephant Orphanage in Pinnawala has recorded the highest number of elephant births in 2011, according to the statistics of the Department of National Zoological Gardens. During the year, 15 elephant calves were born and nine of them were males. Apart from the breeding project in Pinnawela,  the breeding of captive elephants in Sri Lanka seems to be low, a report speaks about only three captive born baby elephants outside Pinnawela..

The Department of National Zoological Gardens has earned Rs. 651 million during 2011, the highest on record. The income came from earnings from the Dehiwala Zoo (Rs. 163 million), Elephant Orphanage, Pinnawela (Rs 487 million) and Rs.16 million from other sources. More than 1. 6 million locals and 20,000 had visited the Dehiwela Zoo in 2011 while around 400,000 locals and around 2.4 million foreigners had had visited the elephant orphanage (Source)

Sri Lanka's tourist arrivals hit a record high in December 2011, with 97,517 tourists arriving in the island, the data released by the Sri Lanka Tourism Development Authority (SLTDA) The month has recorded a 15.2 percent increase in arrivals compared to December 2010 while the number of arrivals in 2011 increased by 30.8 percent over the previous year. (Source)